available in ebook at Amazon 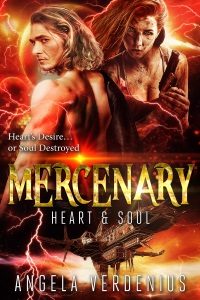 An outlaw world where cruelty rules…

Where some memories are best left alone…

Where some deeds are best forgotten…if you can.

Maverk has been captivated by the leader of the Reeka warrior women since he met her during the years the Reekas were outlawed.  Now they’re pardoned, he doesn’t understand why she has chosen to return to mercenary work in the Outlaw Sector.

Known for her cold, merciless ways, Reya fights for warring District Lords in the Outlaw Sector.  Turning her back on peace and a new life, she walks the fine line between living and dying, fighting and war, death and destruction.

He’s one of a known and respected race.

If anyone should know what drives Reya onwards, it should be her cousin, Dana, who fights beside her, but the secret Reya carries is known to no one.  No one except for those mercenaries who accompanied her on that one fateful mission three years ago.

Eleven made it out alive.

None made it out mentally intact.

Death and darkness, madness and terror.

Walking the edge of insanity.

Maverk’s been asked to bring Reya and Dana home for the birth of her sister’s first baby.  It’s a chance he’s been waiting for, a chance to see her again, a chance to change her mind.

The past is catching up with Reya, and it’s not old allies such as the Daamen traders.  From the deserts reaches shadows, flickering images that haunt her dreams, darkness that haunts her mind…and blood that drenches the hot sands.

It’s coming for her.

They’re coming for her.

The Outlaw Sector is a dark and scary place.  Where savagery lurks, betrayal exists, loyalties are strained and cruelty abounds… Can Maverk and Reya survive what is coming?

Or will her secret be the ultimate undoing?

Connect with Me On:

Signup for news and special offers!